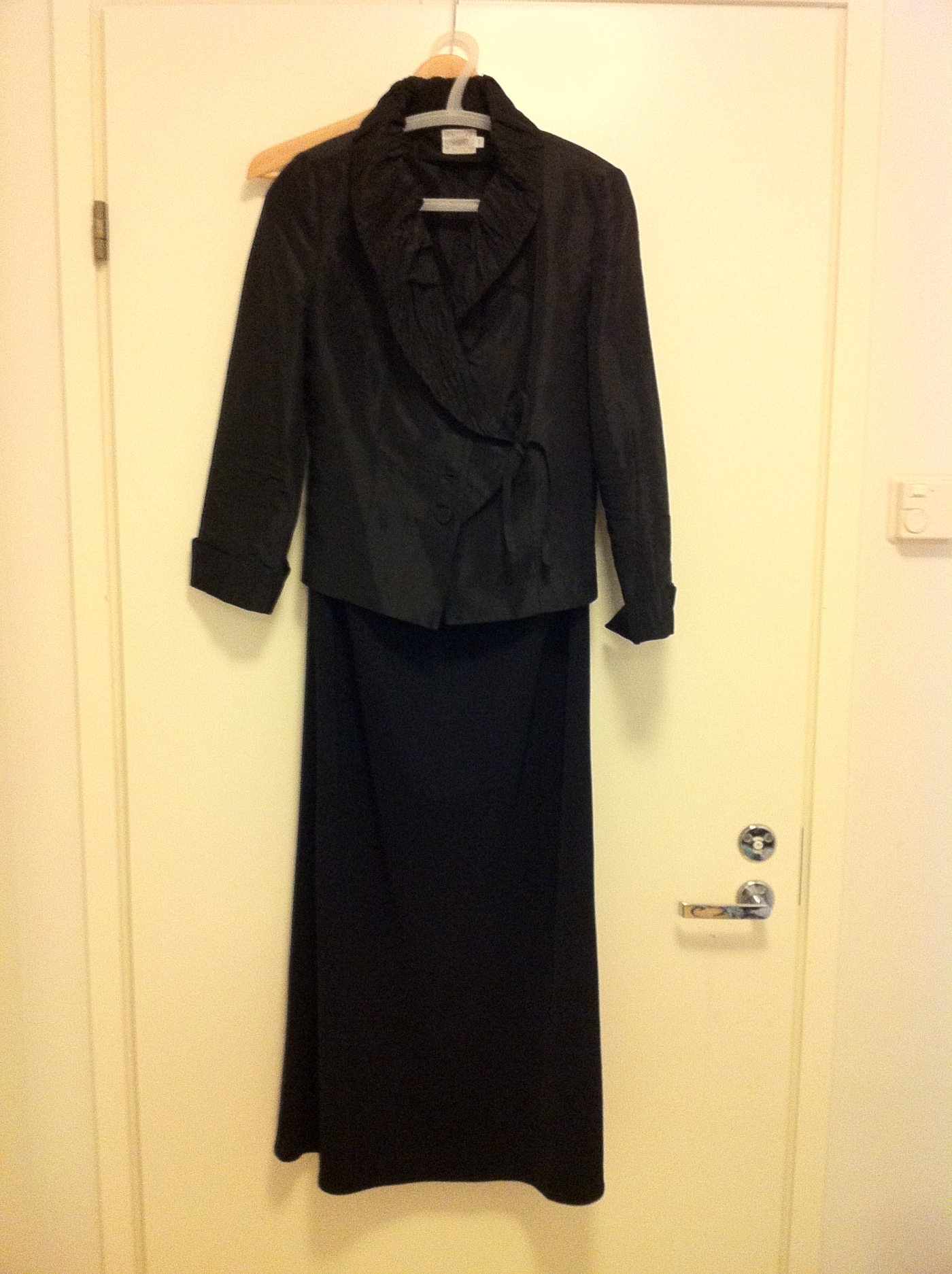 Today’s music is proudly sung by Stockholm’s Gay Choir and What shall we do with a drunken sailor? I had occasion to sing this last Saturday night, along with 150 ship building professional and partners. The occasion was the 65th anniversary of LRK (Laivanrakentajain kerho) or Shipbuilders club. These men and women have all studied the noble art of shipbuilding and the many disciplines within. In other words, they are all engineers. That’s only half of today’s topic. First I have to get to the Thank You part!

Shortly after Mr. 12 was born it was very obvious that my pre-pregnancy wardrobe was not going to cut it. My body shape went pear-shaped. Literally. All of sudden things were sticking where earlier there had been no issue. Enter my mum who was at that time working at the TAFE Library. The campus housed students studying trades and skill based professions: hairdressing, fashion, carpentry, plumbing, metal work to name but a few.

One day mum mentions that the fashion classes were selling off their work and would I be interest in anything? She mentioned long skirt with matching top. They were nothing fancy or elaborate, jersey fabric and an elastic waist. I bought two: one red and one black. They could be mix’n’matched with other items, folded to nothing in the suitcase, washing and drying were a breeze.

In the years since the red set has been my Christmas day outfit here in Finland. It fits Finnish Christmas so much better than anything else I own. The black I have worn a few times, and last Saturday it saved the day. You see, LRK’s 65th party was Formal (yes with a capital F). Now we get invited to maybe one formal event each year, and so far I’ve managed to get by with some creative wardrobe pieces and bending the rules a little. Not this time.

Of course, I hadn’t taken too much notice of the invite. Midday Saturday I start looking in the wardrobe. Two outfits take my fancy. As the event started with a harbour cruise I wanted something I could move about the boat comfortably in (and still look good!). Outfit selected, I thought I’d check the invite and programme one more time. Then I realised that it said juhlapuku!* Now I started to feel a little numb. In the words of The Engineer, “you have to be ready if you ever get invited to the Presidents Ball”, to which I replied, “when that happens I’ll get a new dress thank you very much”.

My chosen outfit was perfect cocktail. It was far to late to buy anything, anyway my wallet was empty. Thinking thinking. Then I remembered my long black skirt. It was long, it was black and seriously who is going to notice that the fabric isn’t silk or satin. I figured I could dress up the top, and play down the bottom. That’s exactly what I did.

THANK YOU to the student who made this fantastic skirt. You saved my night and I hope that the intervening years have been good to you and you have gone onto bigger and better things since.

The next issue to tackle was make-up. Those that know me in the real world (in the time of living in Finland) have probably realised by now that I don’t do make-up. The reasons for this are worthy of their own post. Suffice to say the men in my life crack lovely jokes about me looking ghoulish and vampirish when I do get around to putting a face. Their biggest complaint is that I put too much on. Naturally I become a scary beast when you never see me with a little mascara and lipstick. For a formal evening it was probably too little as opposed to too much. There is no photographic evidence anywhere to disprove this theory. So we’ll just leave it there.

In the meantime The Engineer was having his own wardrobe dilemma. Finally I’m ready, and FIRST for a change. Sitting quietly and looking at the clock knowing that the boat was leaving at 15:15 and we didn’t really want to miss it… Finally we are ensconced in the taxi and heading to the harbour. What is the first thing I see on arrival? Another guest with “fresh from the salon” hair piled high and a glorious dress. I turned to The Engineer and said something along the lines of being under-dressed. Silly I know, especially as I felt quite good in the outfit. We women can sometimes be our own worst enemies.

Onto the party itself. A welcoming drink on-board. Some small speech as the boat pulled away from the pier. Shortly after the majority of the crowd moved to the upper deck where there was a band playing. We sat downstairs for a while talking with to one of the professors and a colleague. Eventually we too headed to the upper deck where I met (finally) a gentleman that I have been mailing occasionally, and billing often. He asked me to dance and was not at all perturbed when I said I can’t dance (true, I cannot waltz to save myself). We danced anyway!

Our cruise took us around the harbour, close to Suomenlinna, the island fortress that is definitely one of Helsinki’s crown jewels. As The Engineer commented the next day, it’s quite unlikely that the majority of the group noticed where we were!

Important note here: our welcoming drink had been sponsored by AARC, and that included the glass it came it. We were instructed to hold on to our glass if we wished to enjoy some bubbles on stage II of the event.

Our party was a little Planes, Trains and Automobiles. Our boat returned to harbour and our merry bunch was spilled out of the boat and onto buses. There were bottles of bubbly moving through the bus, and out came the glasses. It’s a little difficult drinking bubbly drink on a bus as it drives over cobblestones. Warm bubbles up the nose make you want to sneeze.

We headed west to the university campus and arrived at the student hall where our dinner was taking place. From the outside it resembled a concrete bunker (with a couple of windows) and a strange protuberance over the front door.

Isn’t it cool and weird at the same time! Inside we followed the curve of the building up a ramp to the coat-check and finally into the main hall itself. As always there was a queue for the lady’s toilet. I discovered that the upstairs toilet had not queue at all. Shame it took me half the night to discover that!

The food was good (and plentiful!), the company was friendly and pleasant and the songs with accompanying toasts kept going and going! Luckily our menu was also the song book so we could sing along.

The table hopping started after main course, so I hopped to the sonni ** table to greet some colleagues and old acquaintances. This was THE men’s table. Solo travelers, whose partners have decided that perhaps it’s better not join on this occasion. Apparently the parties get a bit wild later in the evening. It was nice chatting with them, apparently I scored points because I went to their table before The Engineer! In his defense he arrived shortly after.

After the food and before the dancing started I got the opportunity to talk with this years student president. I was maybe a little harsh in my comments about the seating arrangements. All of the current students were on one table and everybody else spread over the other three tables. I asked why it couldn’t be mixed up a little more? The answer: this is what the guests want, to sit with former classmates. I’ve never attended any type of reunion so perhaps that is what people want , although it would be nice to sit with a student from now, even if to just swap notes on how things are different (or the same) between now and then!

We headed home after some mingling, a short walk to the taxi rank, where we were in luck. It was a queue of one (actually I think a queue needs at least two to be a ‘queue’) and the light was glowing. As we traveled over the bridge heading towards Lauttasaari the ‘super moon’ was hovering some way of the horizon. Nice ending to a fun night out. Now I have to get around to finding myself a decent juhlapuku.

** Sonni is Finnish for bull, as in the large male bovine.

I've said my bit! Now it's your turn :) Go on, have your say. Cancel reply

@lagottohanna this is what I'm talking about 🥰❤️🐶
This is Volle! He moved in yesterday 😜
NOT from today. Too much 🌧️ and not enough ☀️ to power my solar lights...
This year's hot summer has been hard on the #fern / #saniainen
House hunting or plane spotting or dog walking (or all three 😜)
I blogged about these earlier in the week. Here we have a before & after 😜
🍓 ❤️

My glass is always half full although I definitely do not subscribe to the notion that the grass is greener on the other side.

As they say "expect the unexpected".